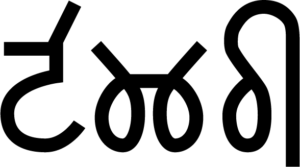 Some people argue the rise and fall of languages (and scripts) is a natural phenomenon, but in fact the behavior of governments is often the determining factor.

Take, for instance, Takri (also called Tankri), a script that was widely used in several northern princely Indian states from the 16th century. It was patronized by Dogra rulers of Jammu and Kashmir in the 17th century and employed extensively by them for official purposes, developing several regional variants and coexisting with the Persian script used to write Urdu and the Devanagari script.

In 1944, though, Devanagari was chosen as the official script for the Dogri and other languages of the region — and, in fact, for much of India — and Takri fell into almost complete disuse.

What saved Takri from oblivion was the fact that it had been used for so long, so widely, and for both official and everyday purposes. Takri was used for keeping business records, writing administrative documents, such as letters, copperplate land grants, and official decrees. It appeared on postage stamps and postmarks from Jammu and Kashmir from the 19th century, in temple inscriptions, and translations of Sanskrit texts into the Dogri language printed in the Dogra version of Takri, called Dogra Akkhar, were commissioned by Maharaja Ranbir Singh, the best-known of these being the mathematical treatise Līlavatī by Bhāskarācārya.

Perhaps uniquely, Takri survived partly because it had been used in art. One of the distinctive features of Pahari miniature paintings, a form that developed in northern India between the 17th and 19th centuries and defined a new genre in Indian art, is the practice of including titular inscriptions or commentary along one border in Takri script.

In February 2006, a workshop was held in Kullu, Himachal Pradesh to provide training in the Takri script that was used for writing Kulvi.

In January 2009, the government of Himachal Pradesh established a program in association with Indira Gandhi National Open University to train specialists in Takri under the guidance of the National Manuscripts Mission.

In 2015, after two years of research into inscriptions, old account books, letters preserved in museums and revenue records, a team of enthusiasts produced two Takri fonts, and now Noto Sans Dogra has been released.

The Dogra Art Museum in Jammu features signs in Takri, and most recently, so does the Jammu railway station. “Set on top of the signage,” wrote a Dogra blogger, “it is enough to fill any Dogra heart with pride and a sense of relief.”

And in November 2019, as part of the events of the United Nations International Year for Cultural Excellence, a Dogri poem, written by Dogri poet Heena Mahajan and transcribed into the Takri script, was recited by Manu Khajuria, Founder of Voice of Dogras, at the House of Lords in London.