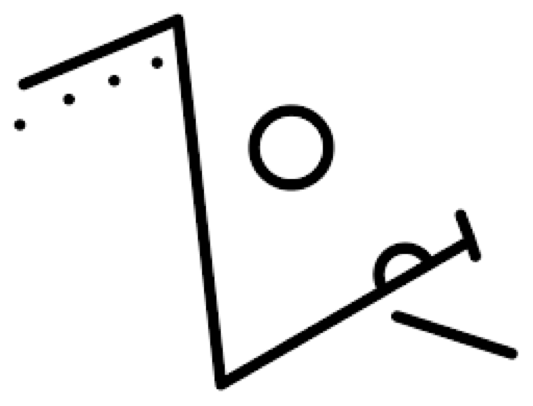 Nsibidi is not an alphabet but something more compressed, more graphic — more poetic, in a sense. Technically, it is an ideographic writing system, whose more than one thousand symbols (drawn in the air as gestures, drawn on the ground, drawn on skin as tattoos, cut into or painted on palm stems, or drawn on calabashes, swords, masks and textiles) don’t correspond to a single language but refer to concepts, actions or things that can be understood by people speaking a variety of different languages.The roots of Nsibidi are in the Cross River region of southeastern Nigeria. Its oldest symbols were discovered on pottery found in the Calabar region, and has been dated back to the fourth century. Nsibidi has traditionally been used by the various leopard secret societies of the Cross River region. In the era before these societies, Nsibidi was more broadly used, but has since declined following the introduction of the Latin script in the 19th and 20th centuries.

Nsibidi, according to Some Notes on Nsibidi in the Journal of the Royal Anthropological Institute of Great Britain and Ireland by the Reverend J. K. Macgregor, “originated amongst the great Ibo tribe which is said to number 4,000,000 people… They are a great artisan tribe, and their smiths are to be met in every village in this part of the country, and wherever a smith goes he carries with him the knowledge of nsibidi. The system of writing is really the property of a secret society, the nsibidi society, into which men are regularly initiated after undergoing a period of preparation. Some of the signs of the nsibidi are known to outsiders, but the vast majority are known only to the initiated. To the uninitiated they are mysterious and therefore magical, capable of doing harm because of the `medicine’ that may have been used in making them…”

When Macgregor himself investigated rumors of nsibidi in 1905, “People smiled when I asked for information and declared that they knew nothing about it. The reason for this is that in Efik nsibidi is used almost only to express love, and this term covers such a multitude of most abominable sins that no self-respecting Efik person will confess that he knows anything about the writing of it.”

Like a number of writing systems, Nsibidi has its own creation myth. Macgregor writes:

“The native tradition of its origin is that it comes from the Uguakima section of the Ibo tribe. The Uguakima dwell between Ikorana on the Cross River and Uwet on the Calabar River, and seem to be the people known amongst the Efik people as the Uyanga. By them it was taught to the people round about. The way in which the Uguakima say that they learned nsibidi is this. In the forests of their country live many large baboons called idiok. If a man is staying in the bush all night and makes a big fire to warm himself or to frighten away wild animals, the idiok will come down from the trees and sit round the fire just like men. When the idiok did this, all men were frightened and ran away, but the Uguakima were not frightened. Thus there sprang, up a friendship between the idiok and the Uguakima. After a time the idiok began to write signs on the ground which the Uguakima did not understand. At last it was seen that when an idiok traced a sign on the ground and then acted in pantomime, the sign on the ground meant the act performed. These signs the Uguakima called nsibidi which is derived from an Ibo word sibidi, meaning to play, for they had learned these things through the playing of the idiok.”

The Nsibidi symbols are remarkable for many reasons, not least of which is their ability to compress complex ideas into simple characters. Macgregor points to a symbol like an elongated S that means “a man who makes trouble between two people.” Another rather like a capital K means “a man who practices a bad habit” — any bad habit. More complex signs are compounds that imply an entire story.

In some instances, Nsibidi symbols were used like hobo signs in the United States and Europe — to pass on messages (which were in effect coded) to others in the know. Some might be used as signs of danger, others that a chief welcomed people to his house.

Nsibidi is thought to have been transported to Cuba and Haiti via the Atlantic slave trade, where it developed into the anaforuana and veve symbols.

In 2010 a Neo-Nsibidi project was started with the aim of converting Nsibidi symbols into characters that might be used for a number of languages in this region, supported by additional characters called Akagu.

At the same time, Nsibidi characters are increasingly being included in artwork and textile design by artists of the region. Nsibidi was the inspiration for the Wakandan writing system shown in the film Black Panther, since when an increasing number of new Nsibidi symbols and new ways of communication using Nsibidi are being devised.